Paul had 2 boys make a profession of faith today! 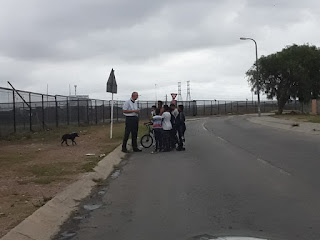 Little girl to Tim alone:  Are you white people?😂

We met several Christians today in Manenberg who are so enthusiastic, and seemed so encouraged to see us reaching out in their neighborhood.

Last week we went to a new place, but we didn’t know the name of it.  I asked a teen and she said, “Guguletu.” Sobered me right up.

In that neighborhood, three groups of adults spoke to Tim and me saying something to the tune of, “What are you doing here?  It’s dangerous.  You need to get out!”  Then we met those teens, who told us where we were and said, “No, it’s not dangerous here.”  To them it’s just home.

Gugulethu stands out as having some super aggressive kids!  They wanted tracts, and more tracts, and all the languages, and they were willing to rip them out of our hands if we relaxed for a second.  They mobbed around us by the dozens, making sure that we were noticed in case our “height and white” wasn’t calling enough attention to us.

After Guguletu we slid back into Manenberg for a day.  Paul really had some good talks with people. He prayed with three different individuals or groups.  He talked to a group of boys, maybe 6 of them, and they prayed to ask the Lord to save them.  Next was 2 girls, maybe 10 years old, and then there was a man named Douglas.  They had quite  a talk.  Douglas had just lost his business, and was feeling pretty hopeless.  They prayed, Douglas asked the Lord to save him.  He appreciated Paul's help.

We ran into LOTS of kids that knew Paul from Phoenix High School or Easterpeak Primary School.

When we were in Guguletu over the weekend, it felt like half the people—more than half the males—were drunk.  I forgot it was a holiday which probably upped the liquid intake.  One (drunk) guy was disappointed in our tracts, saying, “I thought you were giving out vouchers.”

He recovered from his disappointment quickly, and then pointed out his friends who “needed it” (religion).  Some people love to sic us on their friends as a joke.

Another guy, also in the tipsy department, said something like, “We are hungry!  You need to give us money for food.”

Looking at his bulging tummy, I laughed and said, “I think you and I need a diet!”  He laughed too, and sort of agreed.

Thursday we had a remarkable day:  no one turned ANY of us down for tracts!  Worth noting.  Rare.  Cool!  Thankful!

Paul had a fun moment.  Some guy asked for 50 rand to go with it.  Paul ponged back with, “No, no.  I’m only charging 40 rand for this one.”  The man laughed.  They just have to take a chance that we are millionaires, looking for places to disperse our wealth.

Usually, when they say they need money, Paul says emphatically that this message on the tracts is even more important!

Another one today, a young Muslim couple was sitting in a little car with a sun roof.  Paul walked up and handed a tract down through the sun roof, saying, “A message from Heaven.”  They laughed and received it with thanks.

Today we were in a very tame neighborhood compared to some places we’ve been, but we still got solemnly warned of how dangerous it was.

April 2nd we moved to the Port Elizabeth area.  Port Elizabeth has recently changed its name to something very not-user-friendly so I'm being old fashioned and sticking to the old name.  First we were in a nice neighborhood where there were few walkers, so our tract passing wasn't very memorable.  Then we tried a more pedestrian place, but it was rainy so again, we weren't scoring too many.  I was driving, Paul and Tim were hopping in and out of the car as we found little groups.  I did get a few to come to my window, one of whom was a young girl who looked terrified of Paul.😄

He had several groups of mostly boys listen to the plan of salvation and pray with him.  Now they're on his prayer list for life, I think.

Posted by Paul and Vicki Young at 3:07 PM