So many days, all the fun little things that happen just get forgotten. I must try to capture them.
One apartment complex where we went today said something like, "Just don't go over there. They are shooting.: We went over there. At apartment complex number 2, they said, "Just don't go over there (where we had just been), they killed two people dead!" I laughed, and the little boy explained to me that it's not funny when people get dead, and I was supposed to cry. I was ashamed of myself and tried to explain that I was not laughing about the dead people, but just at the way each apartment complex thought the other was the bad one. 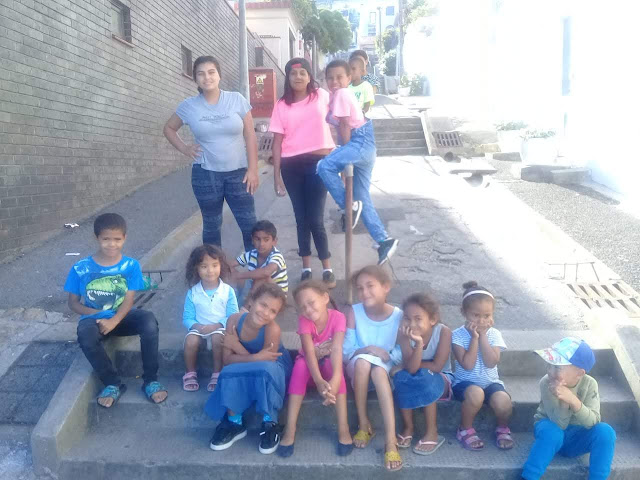 On New Year's Eve, we got our spare tire stolen off the back of the Jeep while we were tracting in Nyanga. Tonight, a guy very carefully watched the Jeep for us, he said. Being a tease to the bone, I couldn't resist. "But where's our tire?" I asked. He was concerned. I didn't let him stay concerned for too long, but told him it was already stolen before we got there.
I love how the Polsmoor  Prison "grads" light up when they see Paul!  There were several today.
Two girls took my number.  We'll see if they call.  I hope that wasn't a dumb thing to do, giving out my number.
*********************************************************************************
Today (the 9th) Tim had a guy call him over so he could get a tract.  Tim gave him one, noting that the man was drunk.  The man waved a wine goblet at Tim and said, "Take a picture.  Tell Ramaphosa (the SA President) we are thirsty."
Our current lockdown plan includes no alcohol on sale, which he had obviously managed to bypass.  The banning of alcohol sales has cut out a lot of crime and injuries.
I had 2 cute little boys come for seconds on tracts.  "They did break." was the reason for the second go round.  Apparently someone ripped someone's.
Paul had a group of boys who prayed, and made a profession of faith. 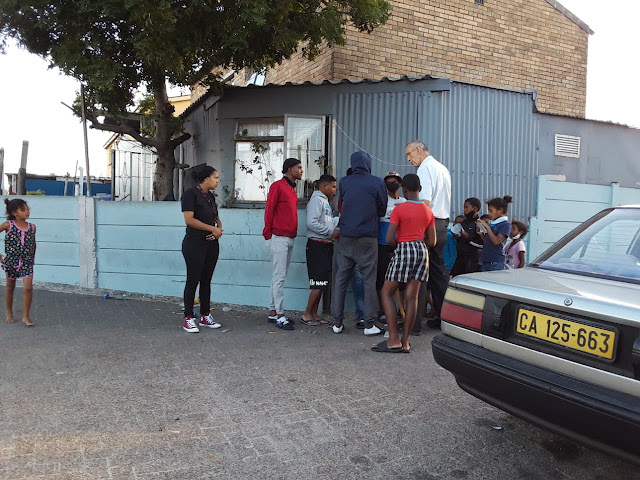 An ultra sweet encounter in the street.  Several prayed aloud to be saved.  I rarely take pictures of moments like these, but this time I felt unobtrusive in the car.
***********************************************************************************
Today I brazenly invaded a braai (BBQ), saying, "I'm crashing your party." I passed out tracts to everyone, laughing, and, thankfully, they thought it was funny too.  Phew!
Paul ran into an encouraging guy who is an evangelist, street preacher, former gangster, and wanted some tracts.  He watched Paul for a while first, then told someone, "He's a man of God," then came over to talk.  He was a real encouragement to Paul.
He met a guy at visa and passport place who said, "Hey, I know you.  You gave me some money once."  Paul didn't remember him at all, though it sounded vaguely familiar.
Hanover Park has been a fun environment.  On Thursday, we saw a lot of little kiddie pools, and a LOT of wet people.  Such a nice community feel there, so many people in the streets. 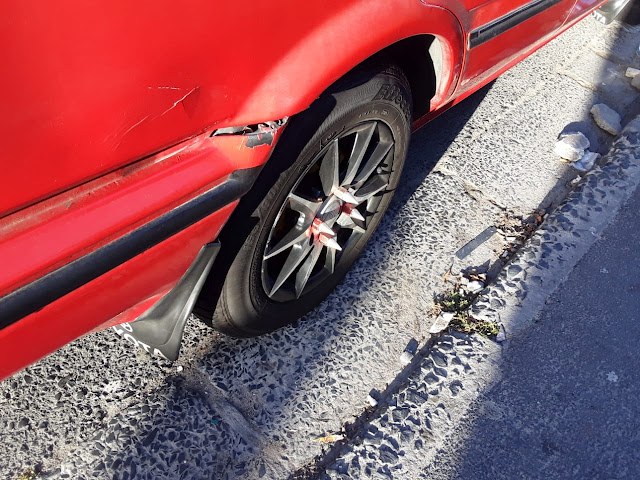 Two little girls asked me to pray for them, just a blessing.  Not sure I handled that right, but I did pray.
It's so helpful when someone recognizes us from Paul's chalk drawing on the front of the "Which Way Are You Going?" tract.  Instant better reception.  Tim also gets recognized from speaking in schools.
**********************************************************************************
We met a man walking with only one page of the This Was Your Life Tract, reading that one page.  We told him we could give him the whole book, and he was glad to get it.
I got an arm put around me by a drunk today.  😒  Not my favorite.  Tim was across a courtyard.  I twisted his finger and left.  (Thanks to my cousin Butchie for evasive action training as kids.  It comes in handy sometimes!)  Another drunk rebuked me for offering to touch elbows with him.  He wanted to touch wrists because, "I'm a gentleman," he said.
Paul had three teenage guys pray with him today.  A Muslim guy refused a tract, because he is Muslim, and Paul said, "This is for everybody."  And then his friends chimed in and agreed he should take it, so he caved in and took it, and a few minutes later was praying with Paul.
I came into one courtyard right after a rock fight that left one boy quite injured around his eye.  The whole courtyard was in a hubbub.   I was nervous of being the recipient of a rock too.  I was wishing I spoke more Afrikaans, though I got the gist of it anyway.  Rocks were thrown, people were mad, and a boy was bleeding.
Both Tim and I were sore today after our Table Mountain climb yesterday.  Anytime we had to climb stairs to give to people up on the landings, it was rough!  We groaned and moaned and laughed at each other.
Lots of the kids ask for extras to give their friends, their "ma" (Grandma), or other person.  We have to try to figure out if they're for real or just collecting a handful to waste.  Today one boy brought his back. His Dad said he couldn't keep it as he is Muslim.  One Muslim lady passed her tract on to someone else because she thought she should not keep it.
Sometimes people ask (to be funny) for languages we don't have.  Paul told a man, "Well, the words are in English, but the pictures are in Xhosa."  His humor usually goes over pretty well.  I just love when they ask for Spanish, and I can call their bluff by saying, "Oh, hablas espanol?"
Paul walked up behind a young man, and startled him big time!  He gasped, "You look like an angel!"
And Paul, I suppose because of an old joke with his brother Joseph, answered quick back, "A good angel or a bad angel?"
The man said, "Good."
Paul:  Why?
"Because you're so big."
I think I'm never going to hear the end of this one.  😏
The joke:  You have the face of an angel!  A fallen angel!  But why did you have to fall on your face? 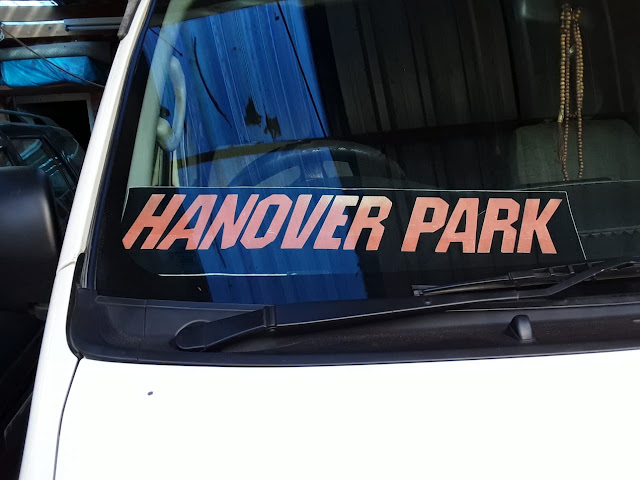 ***********************************************************************************
Three young teen girls ran giggling inside their house to avoid Paul (rare!) so he circled back later and caught them outside again.  They evacuated again, so he left them tracts outside their home, just in case all that running was just playing hard to get.
Some people say, "I don't want that.  Give me R100.  I need Money!"
Paul's response tends to be something like, "Yeah, that's important, but this is a lot more important."  The devil would like us to think we can't give the gospel until we have met all their physical needs.
He had that today,
and then... TWO car guards prayed to be saved!  Separately.
Manenerg was such a cool experience.  We started yesterday, me with nerves, so much crime, and it turned out so well.  Kids came running up the street to see what we had to offer.  Teens recognized Paul from their schools, and some of the girls acted like he was a movie star, "I can't believe it's you!  I can't believe you're here."  Adults came out to see what was going on.
Manenberg has a reputation for lots of shootings (hence my nerves) but there was a great response.  The last sidewalk group Paul talked to saw several young guys praying to be saved!  They asked for prayer.  (One might have been a Polsmoor Prison"grad").  One threatened the little kids what he would do to them if they dropped the tracts on the ground. 😊 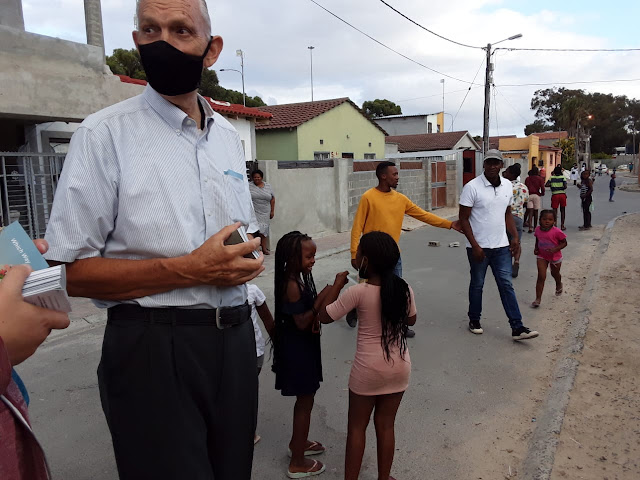 Email ThisBlogThis!Share to TwitterShare to FacebookShare to Pinterest
Labels: 2021, missions