Tale of a Girl---And a Boy by guest writer Sonia (CLOUGH!!!) Einfeldt 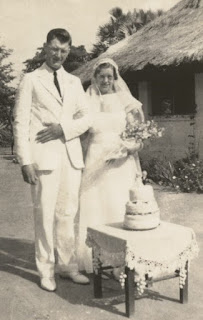 There was, growing up in the far-western New York village of Mayville, a small girl with the big name of Mellba Johanna Christina Erickson. Her parents were both second-generation Americans, but Swedish, as well as English, was spoken in the home. Her dad, Anton, was not a learned man, but was known around the town as “Tony the Tinker”. He could fix pots and other broken things. He painted the little statue in the village park fountain. He did odd jobs here and there. Mellba grew up in the Lutheran church in town, but her family were not believers.

As a teen, Mellba was invited to the Baptist church, where she heard new and wonderful things about the Lord Jesus. She responded to the Lord’s call to salvation, and when she graduated from high school, she applied to Philadelphia School of Bible (PSOB) for further training. She was going to be a missionary! She was outgoing and loved people and fit in well with her classmates.

Upon graduation from PSOB, she applied to a Baptist mission and was accepted. Her support? Her Baptist church in Mayville had said, “We’ll do what we can.” Her outfit? Her father made her a couple of metal trunks to hold her earthly belongings including a bicycle donated by the Baptist church.

Meanwhile… Lee Einfeldt, a farm boy, had grown up just outside the western NY village of Randolph, NY. Lee was a quiet boy and remembers when someone kept asking him questions one day, he replied, “I dunno. Ask Lynnie (his brother). He likes to talk!” Each school day Lee and Lynn would hitch up a team of horses and ride into school in the village, park the team in the barn of the Baptist parsonage and walk the extra block from Church Street to School Street. And each weekend, the family would come into town together to worship at the First Baptist Church of Randolph, NY. After high school he and his brother Lynn enrolled in Houghton College and his supportive parents moved with their sons to a farm outside Rushford, NY, near Houghton. The family became active members of First Baptist Church of Rushford. Lynn studied business and didn’t enter the ministry until his retirement from IBM, but Lee was focused on missions. He was accepted as a missionary candidate… headed for French Equatorial Africa.

On Mellba's final weekend in Mayville before leaving for France, her home church in Mayville was holding a Missionary Conference featuring returning and prospective missionaries.  Fully aware that she was to be a featured speaker that Saturday evening, she could not resist the "call" of the town fire-whistle. Both of her older brothers were firemen, and her natural adventurous instincts compelled her to jump on her bike and pedal across the back streets to share in the town excitement. This route took her past the First Baptist's parsonage, and a quick glance  afforded her a glimpse of a set of broad shoulders silhouetted in the front window. "Must be the guy who's wanting to go to Africa that I've heard about," she thought as she sped on by. They were formally introduced that evening, and learned that they were headed to the same field…with the same mission. They met the following morning in her family’s kitchen. (It's not known which of the ladies from the "Mellba Missionary Society" from her church made that arrangement, 😉)  Years later she told her daughter that as she stood behind him serving coffee that morning, she  thought, "Who would ever marry a guy with a nose like that?"  As for Lee, he was being polite; he never did develop a taste for coffee!  Mellba left for France the following morning, for language study.  The year was 1936. She spent the required year learning French at the Alliance Française before boarding a ship for Cameroon. Once there, she was to go inland to French Equatorial Africa. In those days, one method of transport was  by “push-push”, a seat on a frame with one wheel at the bottom and poles for young African men to push and steer from either end. She made it inland to the country she had been called to serve and which became her home for many years. Mellba plunged herself into learning Sango, the local trade language, and beginning her life work.

Meanwhile, Lee, a man of few words, but with strength of body and character, finished his last year at Houghton College, then a year after Mellba had sailed for France, he also boarded a ship for French language school in Paris. His support? His sending church in Rushford promised to supply $35 a month!

Lee’s and Mellba’s first meeting was significant enough for the two to correspond the year she was in France and he was finishing his last year at Houghton, and they continued their correspondence during her 1st year learning Sango in French Equatorial Africa, and he learning French in Paris.

In 1938, having completed the French language requirements, Lee boarded a ship for his place of service – French Equatorial Africa.  All 1st year Sango studies were conducted at Ft. Crampel (now Kaga Bandoro), so after her own Sango studies, Mellba was transferred to Ft. Archambault (now Sarh) about the time Lee arrived in Crampel. The letters continued, and it seems Lee & Mellba weren't the only ones interested in this growing love story.  The older missionaries arranged that he not spend the entire year at Crampel, but was transferred early to Ft. Archambault for further studies.  Mellba was a great help to Lee as he learned the Sango language. With her experience of a year’s head-start on the language, she was able to tutor him on moonlight walks near the mango trees. Soon, he asked Mellba if she would be his wife. She said YES!

One problem was that, according to the French law that governed French Equatorial Africa at that time, a woman desiring to wed before the age of 25 had to have her parents’ written permission! Problem: her parents were far away in the U.S. and mail across the Atlantic was slow in those days. Years later, when their daughter Shirley as an adult was looking at the permission paper that had been submitted, her eyes grew wide and she said, “The permission – that is MOM’s handwriting!” Her dad, Lee, smiled his wry smile and gave a slight nod. Mellba had signed in place of her parents and submitted the paperwork! The authorities granted permission to be married.

June 5, 1939 was their wedding day. They had to first fulfill the requirement of the government ceremony with the Sous-Préfet (local official) presiding. After that, Rev. and Mrs. Lee Einfeldt welcomed friends at a church ceremony and a little reception afterward.

Lee and Mellba embarked on their honeymoon in the African wild. One of the nights of their honeymoon, there was a lion prowling around their bungalow. Lee had to protect his bride and shot the lion dead!

Life was not easy in those first years of marriage. Before they could get back to the States for their first furlough, Mellba received word via telegram that both her parents had died, so, after she left for France, she never saw them again. She also developed infection sacs in the gums under all her teeth. ALL her teeth had to be pulled and she had to wait a full 11 months before her mail-order dentures arrived from France! She lost weight down to 90 pounds!

In 1943 during World War 2, as they headed back to the States for their first furlough, Lee and Mellba had to make a stop in Nigeria at a mission hospital, for Mellba to give birth to their firstborn son, Richard Lee. Later they boarded a troop ship with a naval escort across the Atlantic Ocean, hoping not to be bombed by the Axis forces. On the ship, Lee and Mellba had to be separated, Lee on the “men’s side” of the ship and Mellba and baby Richie on the “women’s side”. They would meet daily at the staircase where there was an opening for them to at least see each other and talk.

Once back in Africa, almost 4 years later, Shirley Joan was added to their family, and 6 years after Shirley’s birth, their “late lamb”, René Allynn (the middle name a combination of his 2 uncles, Uncle Al and Uncle Lynn), completed their family, being born just in time for the annual missionary conference. Lee and Mellba served the Lord in various towns of Chad and the Central African Republic (after French Equatorial Africa was broken up into separate countries). Their main responsibilities included teaching in a Bible school to train national church leaders and encouraging already-established local churches. Lee also served on the language committee that helped revise the Bible which had been translated into the Sango language. Mellba served as a proofreader for the revised translation.

They continued a fulfilling ministry in the Central African Republic until 1970 when health problems made their move back to the U.S. a necessity. For several more years they continued translation and proofreading work in the U.S. for the Sango language committee until they “retired” from missions and became the pastor and wife back in Lee’s hometown and home church of Randolph, NY for 10 more years. Lee was heard to remark, “I never changed jobs at age 63 before!”

After Lee retired from the pastorate, Mellba suffered a massive stroke. After a month in the hospital, she was moved to a nursing facility, but it was poorly managed. One day Lee came home quite agitated after visiting Mellba. He told his youngest son, René (on furlough from Africa in Randolph, NY at the time) that he had decided he would bring Mellba home to care for her. This was a massive undertaking and although René and his wife tried to show him all the reasons that would be a difficult task, he was determined. When they offered to stay home from Africa to help him, he vehemently refused… so for the next 6 years, Lee cared for Mellba, bathed her, fed her, turned her several times a day, so that she never had a bedsore. He showed the community of Randolph what the godly love of a boy for a girl could look like, following the example of Christ loving His church and giving Himself for her.

-- by Sonia Einfeldt, daughter-in-law of Lee and Mellba

(I truly had the best second set of parents ever!)

Sonia recently borrowed my book Love Letters from Africa by my friend Virginia (Young!) Ross, who went to Heaven in February  at the age of 100 years, 105 days.  I put Virginia's testimony on my blog back in 2010, and it was so fun as someone googled her, and Virginia was surprised and delighted to hear that she was "googleable"

Sonia was telling me similarities between Virginia's story and her in-laws story also as missionaries in Africa, so I asked her to write it down for me. She went the second mile and put a picture in too.

Sonia and I met in 2016 at a ladies conference and became friends.  We were so surprised when we learned we have the same maiden name!  Amazing!  But we haven't figured out if we're related.  We also both did time at Bob Jones in Greenville, SC, so we have a lot to talk about when we're together.  She and her husband Rene are missionaries in Kimberley, South Africa right now, though having visa problems.

Posted by Paul and Vicki Young at 8:22 PM

Paul and Vicki Young
Paul Young is a missionary, chalk-artist evangelist, based in Cape Town, South Africa, with his wife Vicki (usually the blog updater.) and sons Tim, 23, Josh, 19, and always remembering Cherish, forever 2. Daughter Evangel flew the coop in 2015, and has become wife to Ryan Ford and Mom to Clarity and Cyrus. Goal: To encourage others in evangelism.