Grueling and Glorious!  Eleven days after we left Cape Town, we crossed the border into Kenya!  Over 7000 kilometers away!  It was crazy to do such a journey in the midst of the Covid problems…crazy, unless the Lord God who created the universe guided you to do it.  I’d have to keep reminding myself of that when the problems and obstacles would mount up in my mind:

--We didn’t have a visa for Kenya.  One website proclaims that visas are no longer available at entry points, only online.

--We didn’t even have a negative Covid test when we started!

--We were denied entry into the very first country we tried to cross into, Botswana, and we still had at least 4 to go!

(Previously, Botswana was our fastest ever border crossing, accomplished in 10 minutes one time!)

Just because the Lord guided us to go, it was not trouble free.  We had rough roads, a bug storm that was rather thrilling in its rareness, and our tired bodies to contend with.  Our air conditioning was a treat while it lasted, but somewhere in Zambia it deserted us.

So yesterday I gave a testimony about it in church.  I got blubbering!  The Lord did it! In spite of my doubts and fears.  He wanted us here, and He got us here.

Every night, we found a place to stay.  Sometimes it was hard because it was after dark.  We’d sing “Guide Me, Oh, Thou Great Jehovah” as we’d squint through the blackness, trying to find accommodation without killing a cow or goat, or worse, a pedestrian.

The two night in Namibia were memorable.  The first we stopped before dark and had time for a long walk, passing out tracts, in the streets of a small desert town.  It was HOT!  We met a baby meerkat!  And I am still annoyed with myself that I didn’t take its picture.  It bit me, softly, and it was a perk of the trip.  When we got back to our motel, I peeked down a passageway, and found a pool!  “Above and beyond what we asked or thought!”  I guess they don’t tell people about it, because we didn’t know they had a pool, and we were the only ones in there, after dark, letting the heat of the day sizzle away.

The second night in Namibia we had just passed through a bug storm that delayed us a bit trying to clean the windshield enough that we could see.  It was very dark when we found a beautiful place to stay, right on the Okavango River, a place famous for its wildlife.  It was more upper crusty than we usually do, but was a necessity at that point.  The big thrill was a HUGE hippo that was grazing right near where we slept!  I couldn’t get a picture because it was dark, but we got a glimpse of the size of the beast and a new respect.

We also spent 2 nights in Zambia, and came close to spending a third.  The first night was in Livingstone, near Victoria Falls.  We had a great time passing out tracts as we walked around town in the dark.  People are so receptive.  Many asked for extras “for their friends” and one guy asked for 31 to give one to each of his students!

In South Africa and Namibia we could buzz along at 120 kilometers per hour.  In the rest of the countries, the max was 100 kph and 50 was a lot more common.  We were thankful for cruise control that helped us obey the limit, until I hit an exceptionally bad pot hole and the cruise control doesn’t work any more.  🙄

Lusaka is a favorite stopping place from other trips, but this time we went through around noon, so there was no stopping that early.

We kept going until nearly dark, and tried to find a place, but I wanted someplace quiet as the Livingstone night was in town and Saturday night noisy.  It got totally dark, and then we discovered we were only another hour or so from Forest Inn, a place we had stayed in 2012, so we pressed on, anticipating a decent place.  It came with a flood of memories, making me miss the three kids all afresh.  They had WiFi…our last night for it until Kenya.

We had hopes of making the border of Tanzania the next day, and we did, but it was a grueling day.  They are making a new road, so they had us and 18 wheel trucks use a parallel dirt road.  We’re grateful for our Jeep!  It did fine in the holes and mud and bumps, but it was slow going.  We reached that border around sunset.

Border crossings are a little scary.  There are so many variables!  This one took a long time, and another good chunk of money, but it went smoothly.  You not only have to get a visa, but travel insurance for each country, permission to “import” your vehicle, and now the negative Covid test.  There can be local taxes, road taxes, and other hoops to jump through.  There’s no arguing, just jumping through each hoop, and trying not to get robbed.

Paul LOVES passing out tracts at border crossings.  There are so many people, and they have lines to wait in so they might as well read and improve their knowledge of eternity while they wait.  We get in fun chats with people, and several times people have felt the need to give us their opinion of our President (not my fave 🤨).  I get free Swahili lessons too!  At the Namibian border crossing a lady behind the desk told me I didn’t sound American, so I put on my best Southern accent and said something like, “Hey, y’all!  We’re so glad to be here!”  She was charmed, I’m sure.  Paul told me I did cultural appropriation.😁  He’s the only one who knew my accent wasn’t spot on perfect for a Southerner.

The second night in Tanzania we had made it to Dodoma!!!!  Dodoma is made famous in The Jungle Doctor series of books by Dr. Paul White that our family has enjoyed.  The doors say “Sukuma” on them, which means “Push”.  The Jungle Doctor had named his car Sukuma, so that gave us a little thrill, and we had to take a picture of the word the first time we came through on the way to Rwanda in 2016.

This time we arrived just at dark, after a gorgeous trip through winding mountain roads from Iringa.  We began to hunt accommodation.  We punched in maybe 8 different places that our GPS showed, and we’d work our way through dark, crowded streets, and the things were not there!  None of them!  (I need to write a little letter to Garmin!)  We  were so tired, and  it seemed so impossible after awhile.  Then we saw a place! We pulled in, but it was full.  Dejection!  BUT the girl behind the counter was a sweetie!  I asked if she knew another place we could stay and she called two other places until she found us one!  Then she said it was close, but hard to find, so she sent the gate man to show us the way!  He did a stunning job considering he spoke very little English.  We drove quite a long distance down a sidewalk, but that’s not important as long as we didn't kill anyone.  We made it!

This was better than the place the night before!  It had a toilet seat!  Both nights together cost us less than $30.00 total, with breakfast included in the one place.  Our hostess was named Sarah, and she was just so sweet and helpful.  Just what you need after a rough day of driving.  We were able to clean up and get organized before we went to bed.  She probably would have given us hot water if we had asked, but we both thought the cold shower felt good.

We left a little later than our usual 6 AM because of the included breakfast, then had a memorable hunt for motor oil.  I think we visited 4 petrol stations before we found one that had oil, but had such fun doing it.  I asked for oil and got the key to the toilet.  I laughed, and kept pronouncing Oil as best I could, and the guy finally said, “Oilee!”  Yes!   Then he laughed, and I laughed, and the staff inside got laughing at how two such different things could be confused.  No, they didn’t have “oilee”, but yes, they would love tracts in Swahili.

Tension was building in me as we neared the Kenyan border.  I was driving across the vast plains of Tanzania when I first spotted Mt. Kilimanjaro!  Wow!  Awesome!  Majestic!  And I couldn’t even see the top!  It was covered in clouds.  That was an inspiring reminder of our God’s size and strength.

We arrived at Namanga around 3 in the afternoon, tense, but hoping in God.  More  than 3 hours later, we finally made it in!!!  The biggest delay was to get a Carnet for the Jeep.  Happy spots were tract passing (though some very aggressive female made a pass at Paul in the midst of that)  meeting 2 sniffer dogs, and meeting a young man who let me use his WiFi hotspot to check WhatsApp.  First time for WiFi since Forest Inn in Zambia so it was a thrill.

We passed the last checkpoint and burst out singing the Hallelujah Chorus.  And began another hunt for accommodation in the dark.  It took another hour, but we ended up in a nice room, with Wi-Fi!  We slept way late the next morning, at least until 6, I think 😂, had a proper breakfast, not our usual in the car variety, and continued on to the home of Lois Osborne, our hostess, the carrot on the end of the stick.

We had the rest of that day to rest and DO LAUNDRY!!!  We hadn’t done much since South Africa, and our clothes were getting more use than usual.  It was time! 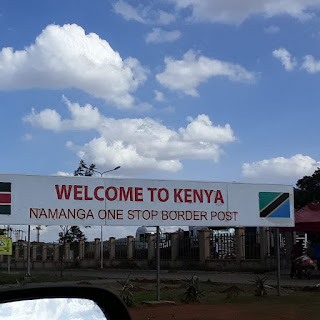 God is good.  We did the impossible because He guided us to.  Now to settle down and reach out to people while we’re here.

Sent from Mail for Windows 10