Adventures in the Hood

God has stirred us up to go pass out tracts in some neighborhoods around our home.  I love the quick little adventures that happen each day.

One day we met a little girl whose 6 year old sister was shot in the head and killed by gangs.  Accidentally. I think.  I hope.  This little girl was 9, the older sister, and so sweet and cheery.  She loved going around with us and passing out tracts.  We enjoyed her being with us, and then she later told us her story.  Ouch.  I told her maybe her sister Nathalie has met our little Cherish in heaven and can play with her.  We don't know, but I'm thankful for the hope.

In that same neighborhood, which is famous for the gangs' shooting, Tim and I walked through a "party".  Loud music was raging, so we couldn't (didn't have to?) talk too much, but we buzzed through this party where many people were smoking (which was illegal at the time) drinking (also banned during the virus) and preparing and smoking more drugs than I have ever seen in my life.

After we were a bit away from that chunk of excitement, I got the giggles, telling Tim that was an unusual mother/son outing.  (Pray for those tracts to make an impact!  I imagine people waking up with the rotten after-effects of that party, and finding a tract in their pocket, and reading it and crying out to God.)

We offer tracts in English, Afrikaans, and Xhosa with just a few Chichewa left so we're trying to get one  translated into Chichewa.  Most people are pleased to receive a freebie, and we just have great fun passing these things out.  Tim particularly seems to get mobbed by kids who want to collect as many as they can.

"Small Paul" is rather well known to the young people in these areas because he's preached in so many schools.  Eyes grow wide when I tell them Tim is our "baby", and they laugh at the idea that this big 6'7" guy is anyone's baby. Many ask, "Are you one that did magic with the bottle?"

I had a teen ask for 20 rand.  I told her I didn't carry money at times like these, but offered her a tract.  She took it, then protested, "I'm a Muslim."

Me: This won't hurt you.

Her:  I'll give it to my Christian friend.

Me, smiling: OK, but read it first so you know what you're missing.

Another day a boy was telling us that his uncle choked to death the night before.  Sure enough, there was a big crowd in the boarded-in yard of the house across the street.  They were just sitting there, many with beer bottles, looking sober.  They obviously needed to know the way to Heaven.  Tim looked dubious, but it reminded me so much of a "reunion" in Peru, I just felt at home and charged in, greeting men (it was all men), telling them "I'm sorry", and passing out tracts.  I didn't chat long, just kept moving.  May they be used for the good.

Once Tim got drawn into some kind of bar/party joint while I was the one left outside.  I had a quick little  panic attack as my imagination went into overdrive.  What would I do if I suddenly heard sounds of a scuffle in there?  Time to quick worrying, start praying.

He was out a few minutes later, just fine, and we continued on down some extremely muddy streets. It was like a tunnel of tin on the sides.  There was no side way out, we had to walk out one end or the other.

Many times some tiny children, too young to read, will hold out their hands for tracts too.  I tend to ask them, "Can you read?" and you see the little cuties' faces work as they ponder this.  They're worried, trying to think if they can lie, knowing their siblings or others might tell on them, but they really want what the big kids are getting.

Of course I cave in, and give them one, saying, "Can you get your mum to read it to you?"  Their faces light up as they grab it and run, before I change my mind.

We've been asked if we're Jehovah's Witnesses, and last night some lady with a Bible wouldn't take a tract.  That's rare.

My friend Margie came with us once, which was fun.  She said she felt rich afterwards, and was checking out a house for sale.  We had another little helper last night, but we weren't comfortable with her following us when we crossed into another neighborhood.  That's when we discovered our helper wouldn't go home!  We had to walk back and hand her over to her Mom before we could continue.

A little girl called out to us, "Hello, white people!" which made me laugh.

We occasionally have rudeness, but it's rare.  Some of it we can laugh off.  If it's not in English we can ignore it.  None of it has been too bad.

I wish I could be braver taking pictures.  I've had 2 phones stolen this year so far, so it makes me cautious. I don’t want a THIRD cell phone to get stolen, but these shacks are fascinating, and the tunnel effect between them is like a HUGE maze on sand.  Thankfully little kids love to guide us around in there.  They tell us important things like where the dogs that bite are, and how to get out. 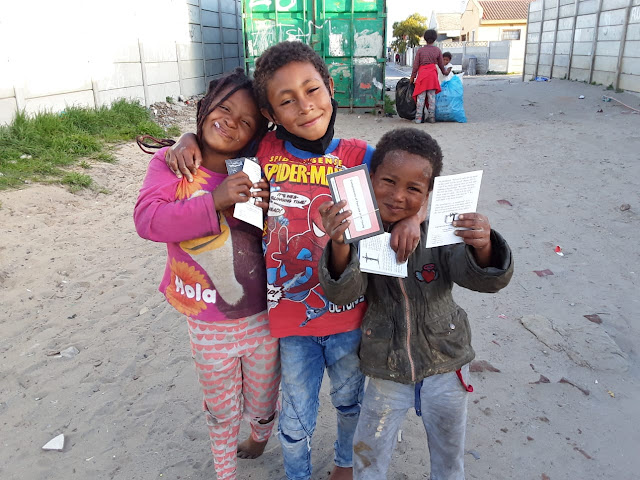 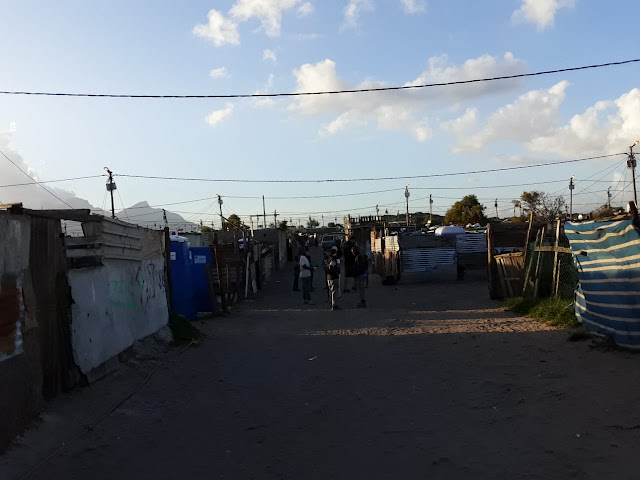 The sky above is beautiful.  The neighborhood is...creative. 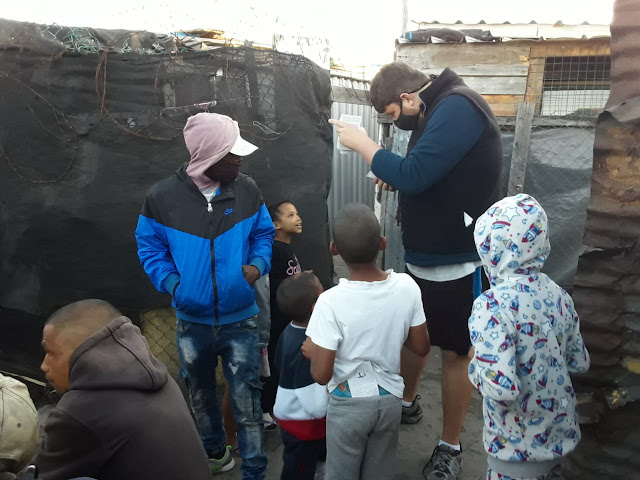 Notice the one tract stuck in the boy's pants, so he can stick out an empty hand for more.  We don't stress too much about people taking multiples, but try to get them in on the fun of sharing.  "Who can you give one to?"  And, "You know, you can read the same one ten times.  You don't need ten of them." with a smile.