The Lost Was Found! Happy Ending

Yesterday morning the calm of our lockdown routine was shattered by one blog post by my brother in law, Rick Huntress.  To read the whole poem, you can go to www.lifegoeson4us.wordpress.com but, these words were rather heart-stopping.

This evening at home


When Grammy and great granddaughter


Were nowhere to be found

Rick went on to praise the Lord for hearing their prayers and bringing the wanderers home safely.  Well!  What happened??!!??  We couldn't call home to ask, as everyone should have been asleep.  We could see Rick had posted his poem at 2 or 3 in the morning, so maybe they would all be sleeping late.  We had to wait.
We held out til after 1 our time, which is after 7 their time, and we called my sister Wendy who is an early riser.  She gave us the first version:
After a family dinner last night, after 7 PM, Clarity, aged 2 1/2, wanted to go outside and play on the rocks.  My Mom, Clarity's great grandmother, agreed to go, so they put on warm jackets (thankfully!!!) and went out.  A little later, Ryan, Clarity's Dad, looked out the window and said, "I don't see them."  Our daughter Evangel went to look for them, not worried, just curious what they were up to.  She walked out to the rocks, and then all around the house.  This was not normal.  There was no sign of them.
Everyone in the house now mobilized, with Josh heading out on his bike, Evangel and Ryan grabbed baby Cyrus and went in the truck and my sister Wendy walked up the road.  Rick was in the house in his wheelchair.  Command control, I imagine.
No one found anything. Evangel decided to call 911.  No one disagreed.  It was just too mysterious.  My Mom has NEVER gone walking in those woods because ticks have been a very big issue since they moved there.  Lyme's disease can make life miserable.
The 2 theories were not pretty.
1. They were abducted.
2.  My Mom fell and was hurt.  But where?
The police got there fast..11 of them, I think, in 9 cars.  They brought a sniffer dog, and got Clarity's scent off of her car seat.  Evangel said it was horrible giving them a description of what they were wearing.  They also brought a heat seeking drone.   (We thought that was cool!  Who knew Maine had such technology?)
My Mom told me what happened to her from her angle.  Clarity was "rock hopping" on a stone wall, and balancing on logs and having a great time.  Mom said it was like you read in a book.  She just looked up, and couldn't see the house.  So she told Clarity it was time to go home, and started walking, but the house didn't appear.
They walked, and called "Helloooo" in case any one was looking, and walked and talked.  Clarity never knew they were lost, and never got at all afraid.  (Good job, Mom!)
They came to a pond with a boat in it, and saw an abandoned shed, and finally, the back of a yellow house.  Clarity said, "That's not our house." rather flatly, it sounded like.  Grammy said, "That's OK, we can go up their driveway, and get on the road, and go home that way."  And that's what they did.
Once they were on the road, they saw a man with a flashlight, looking at the side of the road.  They  didn't know it was their pastor, Pastor Storey, searching the side of the road for any sign of a struggle.  After they connected, Pastor Storey called Evangel, who could now have a good cry of relief.  Ryan came out to carry his daughter into the house, and the dogs reached Mom and Clarity soon after.   They did the same loop down through the woods, and back up the hill behind the neighbor's house in about 15 minutes, since they could run and not go the speed of a 2 year old.
What a reunion!  Bunch of tears flowing, I imagine.  The relief from the fears was great!  Mom was embarrassed, but understood why they had called the police.
Mom had a reaction after she went to bed a few hours later, of shaking all over.  She has never been lost in the woods her whole life!  But now she made a major family memory none of us will ever forget.
I asked Clarity about it the next day on the phone.  I said, "I heard you went rock hopping."
"AND log hopping!" she clarified.  No mention of a fearful walk at all.
Her Aunt Ariel asked if she was scared.  "Yes, I was so scared when I was at Grand-mummy's house and the chicken flew into my face" was the surprising response.
I told my neighbor here in South Africa about it, and she said if they worst had happened, I'd have had a hard time getting a flight back to America right now, during the lockdown.  That was a sobering thought.   It could have been horrible if something had happened and we lost the two of them and then had to try to get there to comfort the family.  If I let my imagination go there, I can cry just thinking about it.
We have much to be thankful for!  We praise God and thank Him for His mercies on this, and are just so grateful we can turn to Him with these problems that get out of our control.  He is good. 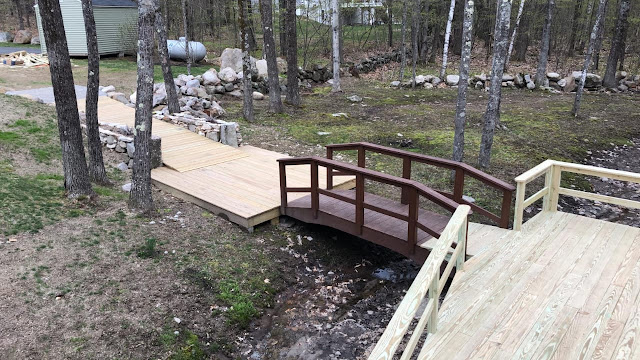 See all those rocks to climb on in the back yard? The first police cars arriving.  Neighbors in that house across the street helped search too.  Church was all informed by prayer chain.  We in South Africa were sleeping peacefully and obliviously. 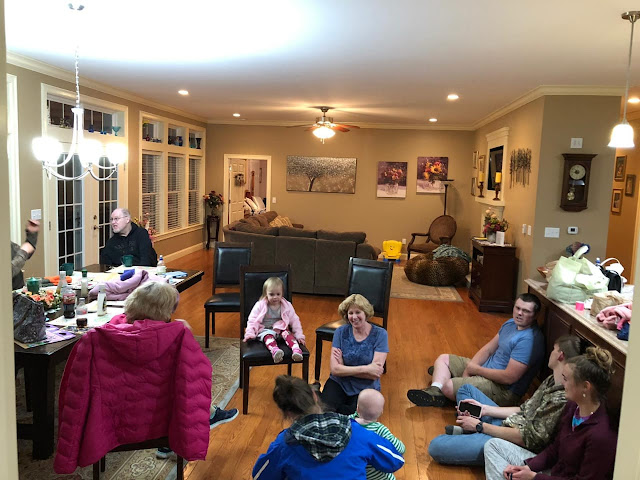 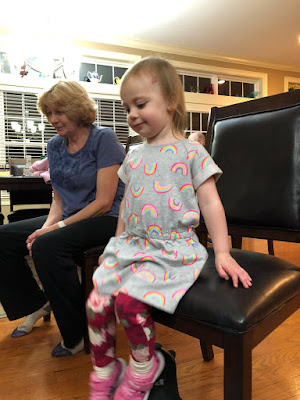 Aunt Wendy and Clarabelle as she calls Clarity.  And they all lived happily ever after and nothing so scary ever happened to them again.  I hope.

Posted by Paul and Vicki Young at 9:22 PM