November 7th, the Tension, the Terror, and the Triumph. Thankful!!!! 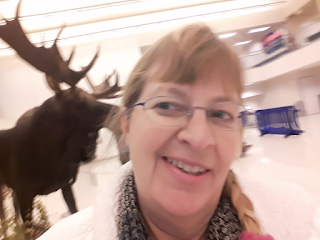 You know you've landed in Maine when there's a moose in the airport!
Our family is so scattered right now!  I left Paul and Tim in South Carolina, while I went to be with Evangel for the birth of baby number 2! And, of course, Josh is in college in Connecticut.

It's a tough call to leave the hublet for so long, but his having 21 year old Timothy, who has a new driver's license (Whoo-hoo!!!!!) made me feel better.  I told Tim to help with driving, laundry, and cooking...3 of my areas of help to his Dad.

We didn't know how long I should be away, since we didn't know what type of birth was going to happen.  20 days turned out to be the best because Paul was in Columbia, SC, again, 20 days after I left. 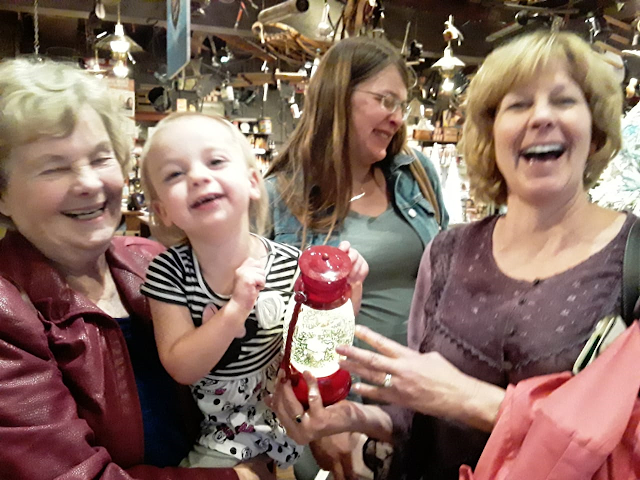 Such a nice greeting from the family!  My Mom, granddaughter, daughter and sister came to pick me up.  Evangel hadn't started labor yet when I arrived on the 5th.  We asked the Lord for the baby to come the next day, as her doctors were scheduled to induce labor on the 7th since they said baby was overdue. 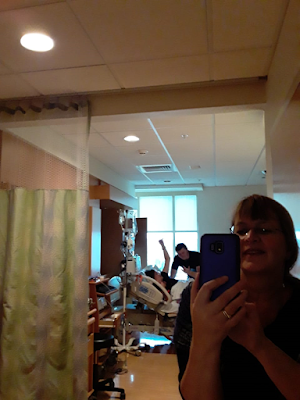 Baby did not come on the 5th or the 6th, though she did have some contractions.  We went to the hospital early on the 7th (by 8 AM) and Evangel was given Pitocin to induce labor.  She was excited.  Her husband Ryan was very involved in the labor.  I tried to be helpful, but didn't do much except get more and more fervent in praying as the day went along.

At 1:30, I was wondering how much more Evangel could take, and then her doctor said maybe 5 more hours.  WHAT?!?!  That seemed so discouraging, but Ryan said, "That would be faster than what we planned."  They encouraged themselves, and I was crying (quietly, in a corner, as I remember) and praying.  I did not feel I could last 5 more hours, let alone Evangel!
Happily, it was not so long!  Baby finally came at 3:39, only about 2 hours after.

We were so excited to meet Cyrus Paul Nathan Ford!  He was healthy and well, weighing 8 lbs. 11 ounces or 3.9 kilos. 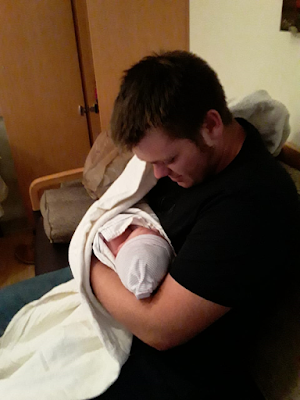 Ryan is fascinated with his son.

Evangel began with complications soon after.  Her doctor rushed to deliver the placenta, and it tore, and she began bleeding.  She was rushed into surgery, and it was scary!

I had gone down to the hospital cafeteria to tell my Mom and my sister Wendy that it was going to be awhile before they could see Evangel and Cyrus, as there was still some bleeding.  We heard over the  hospital loud speakers an urgent call for a team to room 3015, stat.

That was Evangel's room!  I raced back to the elevator, and up to her floor. The reciptionist wouldn't let me back into the room!  I got one glimpse of Evangel as they wheeled her away to surgery, when she said, "Trust God."

I was remembering her last time I had seen her wheeled around on a hospital gurney, when she was 13 and nearly died of a burst appendix.  She said later she felt closer to death this time, and felt at peace with that.  I'm glad she did, but I wasn't peaceful at that idea.

Thankfully, though surgery took 4 times longer (!) than they had said it would be, she came through well, with 4 units of blood transfusions! 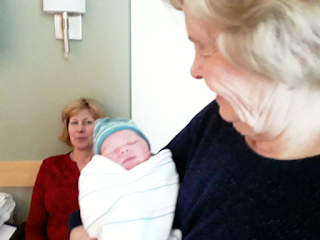 While she was in surgery, some of us  (Fords, Youngs, Huntresses, Haynes, and Pastor Storey) held little Cyrus, though not Clarity.  Evangel wanted to be there for that meeting. Aunt Wendy and Great-grammy are thrilled with the new little guy.  They brought him a new hat. 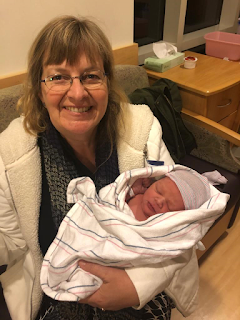 I'm frazzled, but thankful!  We were later offered trauma counseling by the hospital.   I was grateful someone acknowledged what a rough day it had been.  Evangel is already talking about "next time".  I guess that's what John 16:21 is talking about, when Jesus talks about a woman not remembering the anguish, after the child is born.  The grandmother remembers. 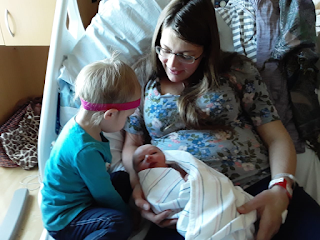 Clarity did come the next day, and Evangel was amazingly better already.  She was able to walk around a little, feed Cyrus, and enjoy seeing the historic meeting. 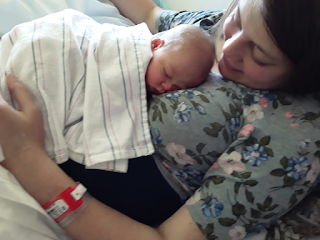 Evangel and Ryan are thrilled with their little man. 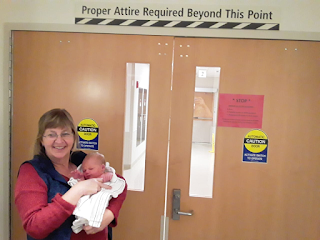 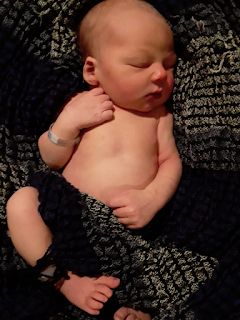 I KNEW Evangel was feeling better when she got going with a photo shoot for Cyrus.  I was inspired by some of the hospital's art in the hallways, so I wrapped my scarf around baby and was trying for some art, but Evangel watched my ineptness and stepped in. I'm so pleased with our results!  I think this one is wall-worthy!  But I'm a little biased. 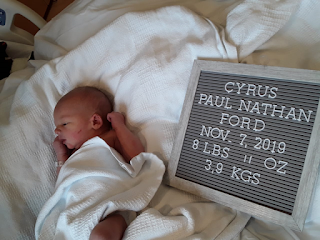 On her last day in the hospital, we got the sign organized before we left.  It was a shower gift from Cyrus's Aunt Holly. 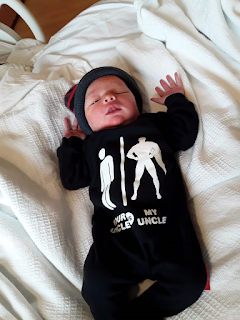 Evangel has known for months that this was the going home outfit if Cyrus was Cyrus.  It's from his African uncles, and says "Your Uncle/My Uncle"  Your Uncle being the bland bathroom uncle silhouette, and My Uncle being the Superman silhouette. 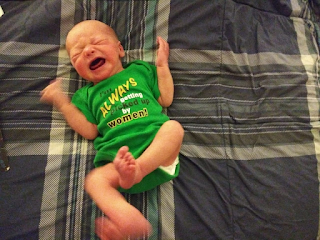 His Grand-mummy brought him this onesie that says "I'm Always Getting Picked Up by Women".  Being a man of virtue, Cyrus is shocked and horrified by this.  :- ) It was a few days before Cyrus could meet his great Uncle Rick.  He took the John Deere approach to dressing that day.  He went farmer style. 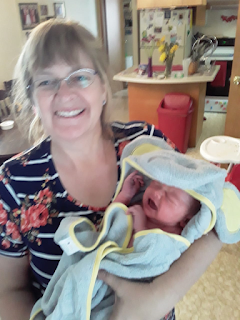 He likes baths, but not the part when you get out of the warmth and into the chilly post-bath air. 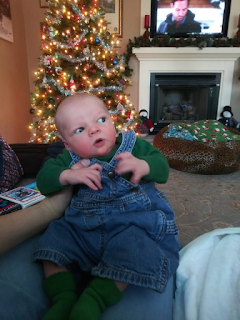 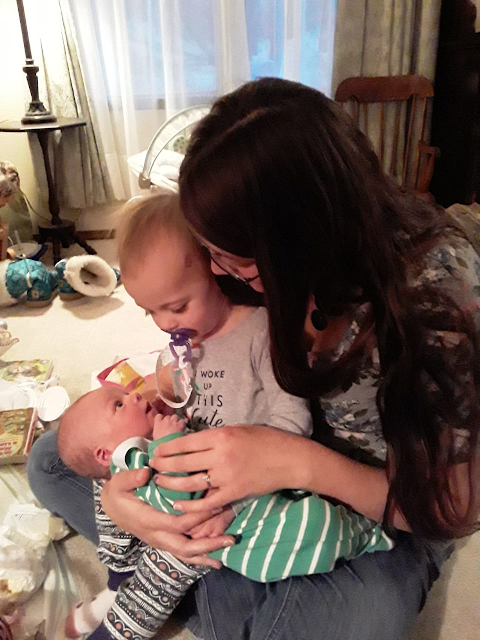 Baby Cyrus came home on Sunday the 10th and is delighting his parents with his every little sign of progress.  He has smiled already!  He's eating well.  All systems are functioning.  Frequently.

My prayer inspired by Psalm 139:13-14.
You're in control, O God, our Creator.  You covered Cyrus in Evangel's womb.
I will praise you, for Cyrus is fearfully and wonderfully made!  Marvelous are your works; and that my soul knows right well.

We're thankful for every single finger and toe, and just love his fuzzy hair, and warm, constantly stretching body.  His "big" feet and hands let us know he's not going to  be  a petite prince.

Pray for this little family.  Baby lives are fragile.  Dad and Mom are tired.  Big sister Clarity has been having some health issues too.  Trust God.
Posted by Paul and Vicki Young at 9:39 PM