By Timothy Young with input from Paul and Vicki

Recently, we went to an African church near the town of White River in the province of Mpumalanga.  After dad had preached a sermon at the church we drove through a section of town called Jerusalem, in the Masoyi tribal district (I saw that sign).  The house was unfinished, but it was much bigger and better than many African houses I have seen.

We were all sort of tired from the travel over to the church from another town, and from the service.  Also after we had taken a tour of the house, the fire for lunch was started.  We were sitting outside, on a porch, when the first part arrived.  It was a clone coke and four really big, really nice pieces of chocolate cake that raised both our spirits and our ability to carry on a conversation.  Remarks could be made about the nature of conversation or sugar or something, but I will refrain from those.  (I, Vicki, would say that Coke/cake combo saved the day!  We were a droopy, blah bunch, and the unaccustomed caffiene turned us into hyper conversationalists.)

So then, adequately refreshed, conversation started to flow.  When Pastor Samuel wasn’t cooking, we asked him how he was saved.  He was a refugee from the Mozambique Civil War in the 90s.  He had come to South Africa after both his parents had been killed in the fighting, and he was in with the wrong crowd.  Then in ‘96 a woman brought him to the large church of Rhema for a few weeks.  Nothing happened there and then his boss started bringing him to another church.  Here he realized that God was real and said that he would become a Christian, on condition that he could become a South African citizen.  He had very little hope of success, but prayed for it.  He also prayed that since he was planning to stay here, that he could speak English.  God answered these prayers.  He could suddenly speak English.  Armed with these two answers to prayer he and a friend went into the premier’s office.  A secretary came down as they came in, instructed to bring in a white man and a black man who had an appointment.  They being white and black, were both rushed in.  Pastor Samuel said that he explained, crying, that his parents had been killed in the civil war and that he had no relatives in Mozambique.  The premier said, “I am half Mozambican, we are brothers.  I will send your papers into Johannesburg.”  In fact, he didn’t just send his papers, but made a declaration that all Mozambicans who had been in the country five years or more were to report for identification documents.  So we can say God answered this prayer too.

It is kind of interesting how we met Pastor Samuel.  Dad had just preached in a Dutch Reformed Church and had left a number of books for people as we usually do.  They are Afrikaans and not generally known for fellowshipping with Africans, and usually the feeling is mutual.  However, due to the bravery of one kind DRC minister back in the early 2000s Pastor Samuel had been holding a Monday service for poor people there.  There was no money to be made here, which is why a number of other black pastors had refused the DR church’s request.  But Samuel  came.  When he arrived on Monday morning he noticed one of the books that Dad had given out the night before.  It was Principles of Church Growth (http://drawingotherstochrist.com/text_sermon/pcg.pdf), and after reading a few pages he prayed that Dad could come to his church.  He had seen that we lived in Cape Town and had not expected his prayer to be answered that soon, but he called anyway and found that dad was in the area.  Dad visited him and arranged for the Sunday meeting.

In 2011 his wife got meningitis and went into a coma for three years.  People advised him to put her into a home and ignore her.  But he daily took care of her needs and stayed faithful.  Some neighbors mockingly said something like, “He healed others but can’t heal his wife.”  So he built a wall around his property for some privacy.  It is a nice wall.  Others of his neighbors said “He doesn’t have the heart of a man, but a cow.” He has a big heart.  Basically it means that he cared more for his wife than was expected of a man.  But in time God did answered his prayers, and his wife was healed.  She cooked a very nice Sunday dinner for us.

Mom asked how he had gotten married, and that was a bit of a funny story.  He had known his future wife for a while, but didn’t think he loved her.  Then one day she helped an old homeless non-christian man, who announced to Pastor Samuel that this was the woman who would work best with him in ministry, so he repented and married her, once lobola was paid.  More on that later.

They have three daughters who have interesting names.  Perhaps the most interesting to me was Surrender, who seemed to be very determined.  I could see so many humorous applications that I was smiling through much of the meal.  Another was Marvelous Wonderful, and the third I think was Helen Charisma.

One of the things that impressed me was the fact that he was not obscure; he had served as an official South African translator in Angola, and had been assigned to deal out large amounts of government funds.  Large amounts (millions).  But he was not obviously proud, the way some people are when they have access to that kind of cash or that level of civil power.  The other money related thing that impressed me was that he never asked for money from us, which is a rare thing.  He commented on how when black people see white people, they see them as potential money.  He repeatedly stated that God was his source and gave some of the examples mentioned above as proof.  He impressed me as someone who God has gifted to be able to handle money and not become trapped in the excitement of handling money.

We had a few other cultural discussions which were just interesting:  the South Korean missionaries that he knew, the Mozambican traditions, etc.  Perhaps the most interesting custom we discussed was lobola, bride price.  It is not strictly between the father-in-law and the son-in-law.  Think of it as a family to family level exchange.  R50 000 lobola is not unheard of, and keep in mind this is a country with the average yearly earning of about that much.  This, of course, in practice creates a cultural push for later marriages, which is ok, except people are people.  They do not always wait for marriage, especially in the city.   He and his younger, unmarried pastor friend of 38 were both against it.  He said that it led to the current state of many fatherless homes in South Africa.

Vicki here again.  On one of triple scheduled days, Paul preached in the prison with the Bible College people at Back to the Bible in Barberton, so Tim and Josh took the other schools he had scheduled.  I dropped Tim first, then buzzed Josh over to a gold mine sponsored school. I helped him set up, then headed back for Tim.  As I was walking to the car, I startled a little boy coming to school. He looked shocked and completely disgusted at my alarmingly white self being in an unexpected place.  I started laughing at his horrified expression, and now, nearly a month later, I'm still laughing when I think about it.

Shrunk from a note to Paul's sister Joy:  We should get home tomorrow!  Yesterday we got to Jo'burg after Paul and Josh spoke 4 times, one planned and three spur-of-the-moments schools.  We began to hunt accommodation, singing our song, "Guide Me Oh Thou Great Jehovah."  First hotel we checked, right by the airport cost over 6000 rand!  Shocker.  So we moved a bit away from the airport and found one for 1/10th of that...more our style.  We got a nice apartment with the best shower of the whole trip!  It had a Roman's Pizza within walking distance which was perfect for the "something special" Paul wanted to do for Josh's last night in Africa for awhile.  Very thankful.
And from a letter a few days earlier: 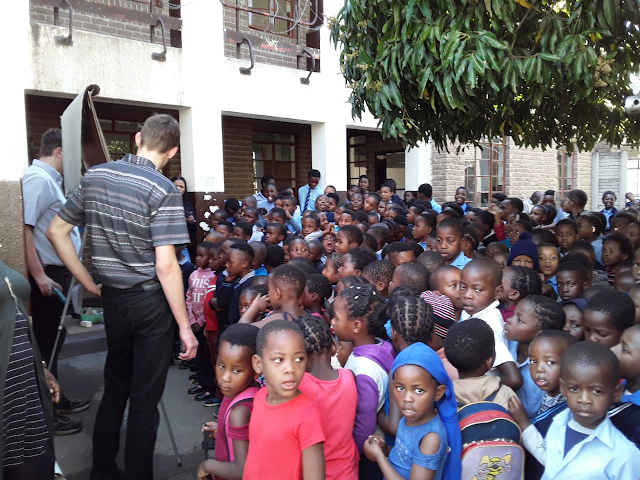 Tim and Josh just after they spoke at the mountain top school. 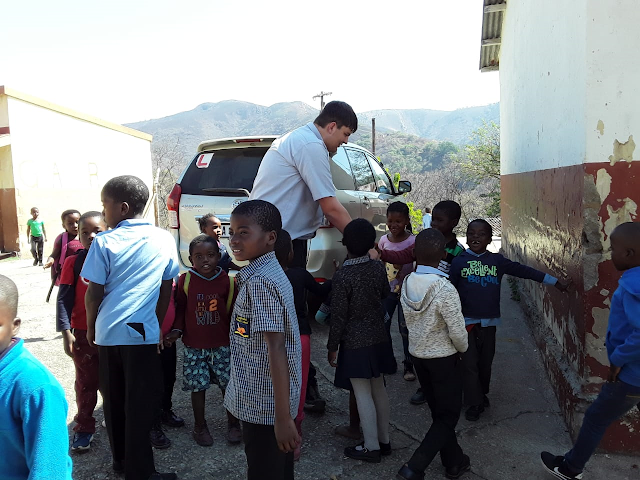 Tim shaking hands at a mountain top school.  These kids were extra fun and friendly.

Paul really did the double scheduling thing today, with some help from Elreza.  Result was that he backed out of his own commitments, and passed them to Tim and Josh, and he did the Mission stuff which was a school and 2 prison meetings.  So I drove the boys, and our second school was so fun and cool.  I.E. NO one was afraid of me.  This was a group of cuties who all wanted to shake my hand, and one brazen lassie took a fearful swipe at touching my hair.  I shook a LOT of little hands.  After they went through, they'd circle back around and have another go at it.  So some days I'm a horror, and other days I'm just plain fascinating.
It was a memorable school.  It went with a gold mine!  Unique, except in this area where all the schools seem to have a plaque saying, "Sponsored by Sheba Mine" or some such.  There are some nice buildings and science labs and computer rooms and stuff.  This one was on top of a mountain, and was quite a thing to drive up there for it.  Scary!   One lane road, and then you're at a little community at the top, where everyone is super friendly.  I enjoyed it.
Right near our mission is a Sheba Mine branch that mines talc.  Or mined talc.  The workers went on strike, and so the mine closed as they were demanding double pay.  So the people totally looted the mine buildings, stealing the roofs, the window frames, everything.   Someone wrote "Sorry" in paint on one building, and I want to write "You killed the goose that laid the golden eggs."  Sad.

Posted by Paul and Vicki Young at 6:05 PM