When You Are Allergic To America

First culture shock in the USA, we hadn't even made it to our airport yet!  We were in Atlanta, with a layover for a few hours, and I went to the Ladies Room.  This Ladies' Room had lights over each door, red if the stall was occupied, green if you could go ahead in.  Wow!  We see that in a few of the ritzy parking garages in South Africa, but not in a bathroom!  America is so amazing.

Other shocks/surprises have followed here and there, but none like the shock of seeing our little granddaughter, and feeling that instant love connection.  Clarity is undoubtedly the cutest, smartest two year old on the planet...at least there are no doubts around here! 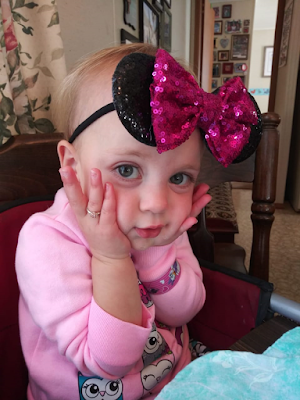 We got whomped pretty hard by jet-lag, but for me it has a new twist this time.  Apparently I'm allergic to something, and I've had swollen eyelids and sinus issues which make me feel like a narcoleptic.  I can fall asleep at the drop of a hat!  Or while my husband is preaching (that's bad! Rude!  Disrespectful!  and sometimes unavoidable.)  Or I can lie awake for hours in the night which is annoying, knowing I'm  going to be bad, rude and disrespectful again later if I don't sleep while the sleeping is good.

So we started off the first Sunday in my home church in East Waterboro, Maine.  That afternoon the church came to us for a baptism.  That was convenient for nacroleptics, and good to see growth in our church.


Many there remembered the momentous church baptism in 2006, interrupted by a call from South Africa telling my parents that Cherish, who was 2 years, 10 months, and 6 days old, had just stopped breathing in a South African hospital.  Evangel's future husband Ryan was baptized that day.  It was memorable.  I've always been grateful my parents had the church family there to take the blow with them.

From there, we've had church(es) each Sunday and most Wednesday nights.  Schools have been filling in gradually, until we've been to 8 schools so far, with one more to go this month.

In between we've been sleeping a lot, spending delightful, laughing times with family, and taking long walks.  We've done some shopping trying to get our wardrobes up to par, and make sure Joshua has enough for his first year at college.  (African MK is learning about wearing shoes every day, and a tie!  Paul just had post-graduate homeschool lessons with him on how to tie a tie.  I had forgotten to put that in our curriculum.)

We've had to get a working US cell phone, get Tim to the DMV to start work on a US license, organize Paul's stored chalk equipment and order whatever else was needed, and sleep some more.

We're trying to spend time outdoors to help get us regulated to this hemisphere, and have taken walks about every day.  Paul's been in the lake about every day, with a mighty splash, though it may only be 40 degrees F outside.  He claims the water is warmer.  I feel his skin when he gets out, and he feels like an ice cube.

Paul works on his latest book when he has free time.  I go for family time.  My Mom, sister, daughter, and granddaughter are my favorite uses for free time at the moment.

Paul's book is growing, and someday we will have it to offer to others who want to do chalk talks.  He's also looking forward to having his notes in print so that he can use them himself on some of chalk talks where he actually looks at notes.

Clarity calls us Big Grampa and Mimi to distinguish us from her (5!) other grands.  When I ask her, "What does Grampa say?"  She says, "Bzzzzzzzzzzz Sting!" for a little game he plays with her.  She loves to be chased and "stung."  She likes for me to sing her own song about her name.  We could just sit and watch her and listen to her for hours.  Such a sweetie!

I am thankful for how it worked out with Joshua at his new school.  He is in Connecticut, nearly 4 hours away from the Camp where we are staying, but we've still had opportunity to see him twice this month because we had meetings near him.  He is adjusting well to college life.  I asked him what was giving him culture shocks, and he said the way some of the guys used water was jolting to someone who has lived through drought in Africa.


We should see Josh next weekend too, when we pick him up for the wedding of the year as far as our family is concerned.  My niece Ariel is to marry Dayton Haynes on the 4th of October.  We are just squeaking in for that one, departing for Pennsylvania the next day, not planning to be back in New England until December.  Praise God from whom all blessings flow!!!

Each meeting has been special (even the school where I stayed in the car and slept with my nose in the air)  and some are worth sharing.

Dublin Christian Academy is always a treat to visit.  I was a student there from 1980-1984 so the memories come flooding back when we visit.  Their upgrades delight me, and finding faculty and staff who are still there also delights me.

We had a missions conference in New Britain, CT, with Tabernacle Baptist Church.  It was so good to get to know the new pastor and his wife, and to meet other missionaries each evening, and learn a bit about their ministries in the States.  We're in a needy world, and it's good to share our problems over snacks  and feel them grow lighter. 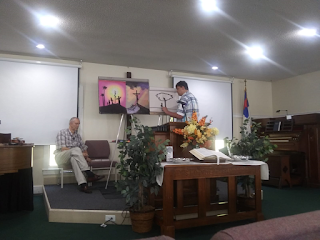 Nute Ridge Bible Chapel is another one that comes to mind.  It has memories for me from way back in 7th grade, but we made a new one this year.  Paul got feeling very low between their morning services, and when I mentioned it to the pastor, he whisked us downstairs to introduce us to ladies who took over and cooked Paul a second breakfast---eggs and English muffins!  It gave him just the lift he needed.  I got a mint Oreo with Double Stuff!  I had forgotten those things existed, and it was nice to get reacquainted.


Of course, Central Baptist Church in Southington, CT, gets a mention.  They have a beautiful prophet's chamber for people like us to use.  We used it when Paul preached at their schools and church, and they let us use it again for the Missions Conference.  It's a favorite any time, but even more now since Josh is there in New England Baptist College.

This past weekend we had a family conference with Tri State Bible Baptist Church at the corner of Massachusetts, Vermont, and New Hampshire.  That was encouraging!  Young families, oodles of children, and people taking Biblical commands seriously was refreshing!  Timothy preached twice there too.

We're soon to swap families for Paul's side of the family, and that will be nice too.  Thankful!

Paul and Vicki Young
Paul Young is a missionary, chalk artist evangelist based in Cape Town, South Africa, with his wife Vicki (usually the blog updater.) and sons Tim,21, Josh, 18, and always remembering Cherish, forever 2. Daughter Evangel flew the coop in 2015, and has a blog too. Proverbial Womanhood! See below. Goal: To encourage others in evangelism.